Trucks on the Tail of the Dragon

2015 - TENNESSEE HAS FINALLY BANNED TRUCKS ON THE DRAGON

It has taken 15 years, numerous accidents, close calls, and a motorcyclist death to finally get the Late Great State of Tennessee to ban trucks on this stretch of highway. Dragon lover Dwight "Ike" Woodward was killed by a semi truck at mile marker 6 in 2011. His needless death was not in vain as it resulted in the State of Tennessee finally banning these vehicles from the famed roadway.

You can see by the photos we have collected over the years that these transports just do not belong here not only for the good of other people on the road, but for their own safety.

Watch it though, we still see trucks sneaking through. If caught the drivers will lose their CDL. So if you see one approaching the Dragon advise them to turn around.

North Carolina led the way for Tennessee.  It is illegal for trucks with trailers longer than 30 feet to operate on US 129 from the Graham/Swain County Line (Cheoah Dam) to the NC/TN State Line. They are also banned on NC 28 from NC 143 all the way to US 129. Also on the ban list is the entire Cherohala Skyway in North Carolina.

WANT TO HEAR WHAT TENNESSEE HAD TO SAY ABOUT BANNING TRUCKS IN 2012?

"The commissioner (John C. Schroer) added that TDOT provides enhanced safety advisories in regards to potentially dangerous roadways and that it is the responsibility of motorists to exercise a greater amount of caution when traveling winding mountain roads."

So in Tennessee the signs warning trucks are actually aimed at other motorists warning them to DODGE THE TRUCKS THAT WILL BE IN YOUR LANE. Leave it to Tennessee to make such ridiculous statements. The commissioner should have been fired. 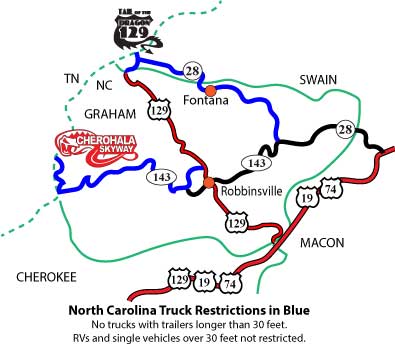 Ike Woodard died on the Dragon when a flat bed big rig completely entered his lane in a curve. We have been fighting for years telling officials this was going to happen. It took a tragic death to get Tennessee's attention

CLICK HERE to see article in Land Line Magazine about trucks on the Dragon.

UPDATE January 2006 email from Swift Transportation:
How are we doing? We have been making every effort to route our trucks away from the Dragon, but occasionally we still have a rogue Driver that wants to do it "his own way."

If you see us up there, I would sure appreciate notification. I assure you we will address it. I still frequent your website. What a great job you have done on that! Beautiful scenery.

The Trucking industry sure gets a "black eye" but rightly so. I hope that we (Swift) will be able to outlive our earlier reputation and become known as the Company that took action and made a difference. We are truly trying. I wish you safe and enjoyable riding.

Trucks on the Dragon have caused very few problems for both motorcycle riders and car drivers in the past. But now that more traffic is using the road these larger vehicles have become a hazard to avoid. Anyone using the Dragon needs to be aware that they might encounter one of these 18-wheelers around any curve. 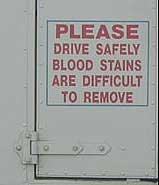 For the most part we do not blame the drivers of these big-rigs. Nine out of ten did not realize what they were getting into until it was too late to turn around. All nine say they will take another route next time. The tenth one is probably a local who knows the road and how to drive it. Many of the locals actually have warning vehicles ahead of them, so if you see a car or pick-up with a flashing yellow light on top waving a flag be sure to pull over and stop because something big is coming!

We have asked semi drivers how they got on the Dragon. Some say they just looked at a map and it was the shortest route. Of course the curves don't show-up on highway maps so here they come. Others have said they used Expedia.com on the Internet .... just fill-in where you are and where you want to go and you map will be prepared for you. Frankly I wouldn't use this method to go across the county, much less across the country. The computer uses no common sense and anyone who follows such directions deserves to get lost and end up on some forsaken back road where the only place to stay for the night is the Bates Motel. I find it incredulous that professional truckers would use Expedia.

Still others are directed on routes by their dispatchers. This is the one that upsets us. We had problems with SWIFT sending rig after rig over the Dragon a few years ago. They caused several accidents and yet repeated contacts with their headquarters failed to prevent them from coming our way. All SWIFT had to do was send out a notice telling all of their drivers to stay off this highway and word would have gotten-out. There was even one Swift Truck that ventured into the Great Smoky Mountain National Park (a big no-no) and then turned into Cades Cove, a one lane, one way, scenic loop, well marked to prohibit not only big rigs, but ALL COMMERCIAL traffic. He made it about a mile before running off the road in a tight corner. Read about Swift

Now that we have your attention, let us tell you how to avoid running headlong into or under one of these cycle eaters. Even at speed you should be able to avoid these behemoths if you are (1) paying attention, (2) are experienced enough to control your braking, and (3) keep a cool head and react under pressure.

Foremost you need to watch ahead for any indication that one of these guys is coming. You can see through some of the curves with your peripheral vision. Even if you don't see the truck because of a blind corner you will likely see it soon enough to have time to stop before you get to it (here is the cool head and controlled braking), or you will not see the truck until late in the corner and have enough room to dive for the white line and avoid it before it steals your lane.

Nancy and I have met many long-trucks on the Dragon and not had a real close call yet on bikes. We were nearly sideswiped in our pick-up truck once, though. We know the bad corners to really watch-out for. Two of the worst are on The Slide just above Fugitive Bridge as you approach Tapoco Dam. There are two sharp corners here with guardrail on one side and rock wall within inches of the roadway on the other side. We slow way down here. That is where the photo on the left of the logging truck was taken. We have actually had people who thought we faked that photo of the truck entering the curve in the wrong lane. Believe us, it is for real! Notice the burned rubber just to the left of double yellow lines. He was smoking his tires trying to break speed going steeply downhill into the sharpest curve within a hundred miles. We were praying that no one was coming at him in the corner.

The State of Tennessee did manage to erect a sign late in 2002 that issues a warning to truckers as they approach the Dragon. UPDATE: North Carolina banned trucks in 2012; Tennessee in 2015.

The really bad time for trucks is when I-40 is shut-down somewhere between Knoxville and Asheville. This occurs more often than one would think because the Interstate winds through mountains with steep rock cliffs where rock slides are prevalent. There are tunnels and narrow passes where a wreck can tie-up traffic for hours, and there are very few alternate routes for a hundred miles. We once spent six hours waiting for a broken down wide-load truck to be towed out of a tunnel and there have been times when rock slides have closed the road for weeks.